TIR is extremely lucky to have Oliver Hoeller as its “artist in residence”. Oliver is a scientist and freelance illustrator whose work has appeared on the cover of a number of journals, and who also carries out web design, portraiture, and reportage.

Oliver originally hails from Austria, and did undergraduate research at the Institute for Molecular Pathology (IMP) at the Vienna Biocenter. He moved to Cambridge (UK) for his PhD at the MRC Laboratory of Molecular Biology, working with Rob Kay on chemotaxis in the slime mould Dictyostelium. He then moved to the Bay Area for his postdoc and is still there now!

Oliver’s watercolours are available for purchase – either contact him via his website or look at his portfolio on Etsy. His Instagram feed can be found HERE. 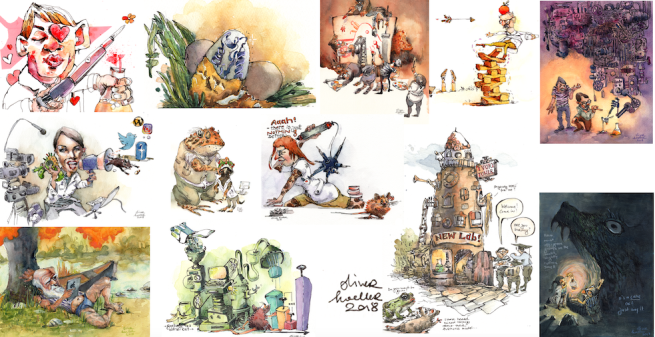 When Oliver’s not available to do the artwork for a TIR posting, Brooke puts silly captions on paintings that he likes instead.