In our third instalment of this series, we once again take a look at some great minds, and the moustaches that went (just) before them. Links at the bottom of the page to the other postings.

Name: Paul Langevin
Known for: Inventing Langevin dynamics and the Langevin equation, providing the modern conception of paramagnetism and diamagnetism, and developing an ultrasound-based method for the echolocation of submarines. President of the Human Rights League and a prominent antifascist who was kept under house arrest in France for most of World War II.
Moustache: Handlebar, and a pretty definitive example of it. Large, bushy, and with upward curving ends. Langevin disdains the elegant and heavily-waxed points that often characterise this style with something that’s bold, brash, and aggressive. Augmented with soul patch, worn long and sculpted to a point.
Moustache rating: 8/10. Not only a great moustache, but a great choice of moustache. Coupled with the straight backcombed hair, the strong, virile Handlebar perfectly frames his cranium, making the direct gaze of his eyes even more penetrating. You wouldn’t be able to look away when he held your attention.

Name: Gerard ’t Hooft
Known for: Work on quantum gravity and black holes, and pre-eminently for his contributions to gauge theory.
Moustache: A classic Painter’s Brush. Thick ‘tache that covers the full width of the mouth, but with upper lip free. Note how the moustache is perfectly positioned to emphasise the smile lines at the corners of his mouth, offsetting his direct gaze with something more informal and playful.
Moustache rating: 6/10. It’s simple, nicely focuses attention around the eyes, and is an insouciant mix of groomed and dishevelled.

Name: Paul Dirac
Known for: His role in the development of quantum electrodynamics and quantum mechanics, and for his eccentric behaviour (unusual even by British standards). A “dirac” was once proposed as a rate measure of one word per hour. The existence of antimatter was predicted by his eponymous equation (the Dirac equation), and his 1930 textbook on quantum mechanics remains a touchstone for the subject.
Moustache: Pyramid moustache, tightly-cropped and with its apex at his nose and base above his top lip.
Moustache rating: 6/10. A man who didn’t waste words, and the moustache reflects it. Curt, clipped, and succinct, it’s a moustache for a man who wants to make a statement with the minimum of ornamentation and fuss. 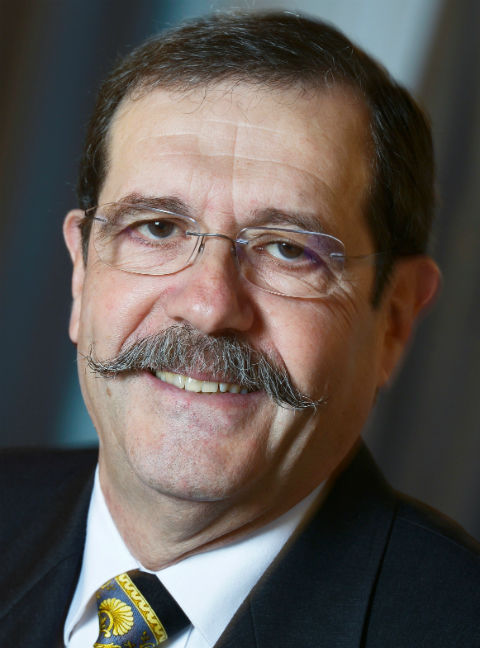 Name: Alain Aspect
Known for: Being the first to demonstrate, by means of experiment, the wave-particle duality of single photons. Extensive work on Bose-Einstein condensates.
Moustache: Another Handlebar, and an illustrative counterpart to Langevin’s model. Full, but worn thinner and with more overt styling of the points, which extend joyously past his cheeks.
Moustache rating: 9/10. An otherwise lugubrious face, with its prominent jowls and drooping eyelids, is lit up by this magnificent traffic-stopping handlebar. Aspect may look like he’s only just woken up and gotten out of bed, but the immaculate styling of his moustache tells us otherwise. This lip weasel has been pampered, played-with, and well looked-after. Right now, he’s ready for anything. 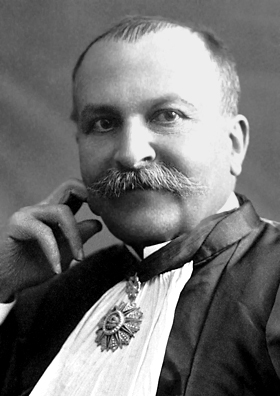 Name: Paul Sabatier
Known for: Pioneering the use of nickel as a catalyst for the hydrogenation of carbon compounds. The Sabatier reaction, an example of this, generates water from carbon dioxide and is used for producing water on the International Space Station.
Moustache: Walrus moustache, entirely obscuring the upper lip, with a rough border and ragged downward-facing points.
Moustache rating: 8/10. Another fine choice. Sabatier offsets his otherwise sleekly-groomed appearance with something wild and brash on his top lip. Even there though, there’s control – this is no hangdog Walrus, but one that’s had some discreet attention at the points to make the whole impression livelier and vital.

Name: Edwin McMillan
Known for: Production of the first transuranic element (neptunium). Co-inventor of the synchrotron. Worked on the Manhattan Project during World War II.
Moustache: Another Pyramid, of ultra-orthodox presentation. Firm tip below his nose’s centre, extending outwards and ending with geometric precision at the edge of his top lip, which is itself free and groomed to micrometre-level straightness.
Moustache rating: 7/10. You can’t fault something simple if it’s done well. McMillan’s renowned precision as an experimentalist is mirrored in his ‘tache, which draws the eyes to his mouth. 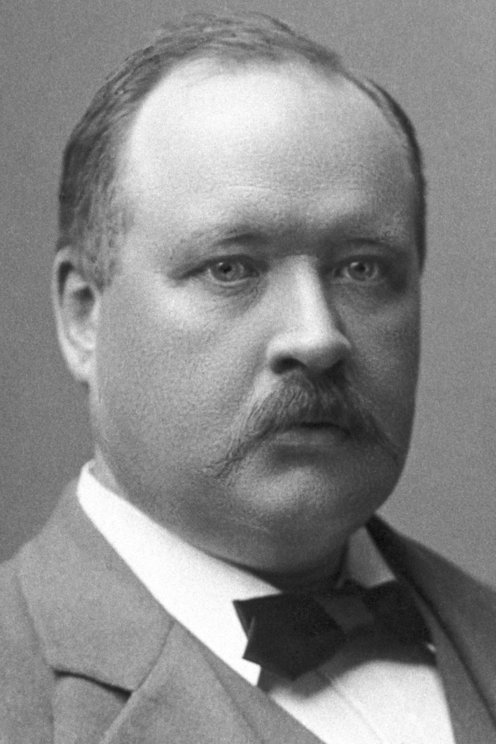 Name: Svante Arrhenius
Known for: Proposing that a salt dissociates into charged particles when it goes into solution (yup, that was him!), and that therefore reactions in solutions are reactions between ions. Articulated the concept of activation energy in chemical reactions (from which the Arrhenius equation derives). Calculated, in 1896, that human-sourced CO2 emissions would be sufficient to cause global warming.
Moustache: What is it? Arrhenius compensates for his narrow mouth by creating something wholly original. Like a Chevron until it reaches the corners of his upper lip, at which point it takes wing and presents two downward-pointing and well-extended tips. Upper lip obscured, muzzle partly groomed, and with styling of the tips. It’s neither a Chevron, nor a Handlebar, nor a Horseshoe.
Moustache rating: 4/10. It’s an impressive growth, but not necessarily a helpful one. The slight indecision and fearfulness in Arrhenius’ eyes is matched by the hesitancy of the styling, which is neither one thing nor another. Plus, the downward lines of the moustache only emphasise the downward tug of his jowls, an effect that became even more pronounced with age. Try again.

Name: Carl Bosch
Known for: Being the other half of the Haber-Bosch process, a means for capturing atmospheric nitrogen in the form of ammonia. Through its use for generating agricultural fertiliser, the Haber-Bosch process contributes to feeding around 30% of the world’s population today.
Moustache: Textbook example of a Lampshade, with growth all the way to the nostrils but with the corners of the upper lip shaved. Lower border tightly groomed. Full, but not bushy.
Moustache rating: 7/10. Like McMillan’s Pyramid, this specimen has more going for it than might be apparent at first glance. It’s a full but tightly-regulated growth, and the choice of a Lampshade – with the shaved corners of the upper lip – imparts a sense of forcefulness and vigour. You wouldn’t want him yelling at you.

Name: Vilém Lambl
Known for: Describing the gut parasite that we today know as Giardia lamblia, and which causes around 350 million symptomatic cases annually.
Moustache: Hungarian. Full and bushy, but with the ends pulled tightly outwards and styled into points. Upper lip obscured. Augmented with full Goat Patch growing from below the centre of the lower lip down to and even slightly beyond the chin.
Moustache rating: 8/10. Lambl’s raffish Hungarian contrasts sharply with the conventional styling of his hair and suit, and it’s a nice nod to his Eastern European roots too. No matter how sober or serious he might behave, the moustache would be a jaunty hint that a more playful spirit lurks inside.

Name: Franz Boas
Known for: Technically an anthropologist rather than a biologist, but what an anthropologist: the “Father of American Anthropology”, no less. Remembered for his opposition to the idea of race as a biological concept, and debunked a number of racist theories concerning skill size and shape. Similarly opposed the notion that culture progresses towards “higher” forms (no prizes for guessing that “higher” usually meant “Western European” in this context) and pioneered the concept of cultural relativism.
Moustache: A freestyle Chevron, with projecting ragged ends. Minimal goatee below it.
Moustache rating: 6/10. A field scientist’s growth. Not for Boas the decadent luxuries of wax or moustache comb, he simply lets it explode across his top lip. No obvious grooming, and the wild appearance contrasts nicely with his formal attire – a clue to his restless and iconoclastic nature.

Name: Ulf von Euler
Known for: Work on the storage and dissemination of noradrenaline (norepinephrine). The discovery that it was stored in intracellular vesicles within the synaptic terminals of neurons was a paradigm shift for the field of neurobiology.
Moustache: Looks at first sight like a Painter’s Brush or a heavily-cropped Chevron, but is actually a Lampshade – note the shaved corners of the upper lip. Slight hint of Pyramidal styling on the top line too.
Moustache rating: 5/10. Euler’s hair has received plenty of love (look at that razor-sharp parting!) but his moustache less so. The lines are a bit uneven, and by not wearing it thick (see Bosch’s grade-A example) it kind of fades away into his complexion.

Name: John Scott Haldane
Known for: Being batshit crazy in terms of gung-ho self-experimentation, a trait he passed on to his equally loopy/intrepid son JBS Haldane. Documented the effects of carbon monoxide poisoning by exposing himself to it in a gas chamber. Invented one of the first World War I gas masks, the oxygen tent for treatment of gas warfare victims, and decompression chambers for deep-sea divers. Was responsible for the introduction of canaries into coal mines (no kidding).
Moustache: An Imperial. Full growth that would rival a Walrus for its ability to obscure not just the top lip but the entire mouth, but then styled outwards and forced upwards in defiance of its mass and gravity. Thick, wiry hair that mimics the coat of a Highland sheep.
Moustache rating: 10/10. Fearless, just like the man himself. With a nose and a brow that prominent, and a gaze that penetrating, you can’t mess around – and Haldane certainly doesn’t do so. Full Imperial bombast, to mirror the larger-than-life persona of its wearer. Field Marshals, Admirals, and monarchs would have quailed around him.

The charity fund-raising bit:
The Movember Foundation works to reduce the incidence of mental illness, suicide, prostate cancer and testicular cancer the world over. Each year, Mo Bros and Mo Sistas grow a moustache for the month of November in order to raise awareness of these issues and collect donations to fund their treatment. To sponsor TIR writer Brooke Morriswood, click HERE – huge thanks in advance!

Links to parts I, II, IV and V of this series:
Great scientists, great moustaches, Part I – click HERE.