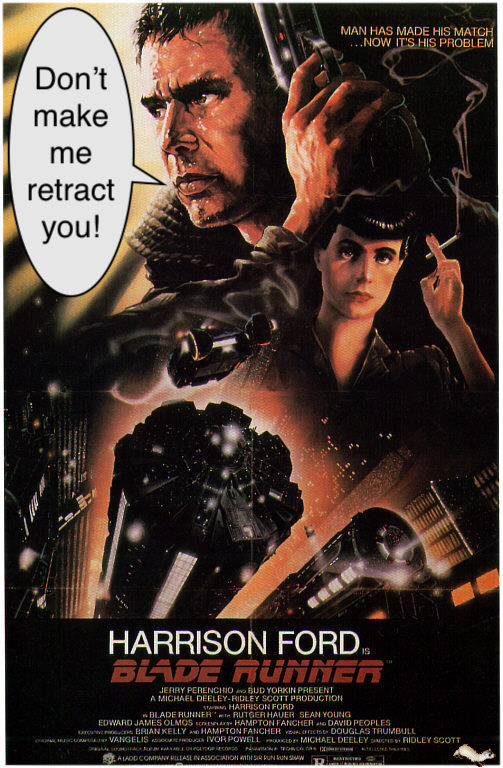 2019. The near future. The world of academia. All the action takes place at night, because people are working crazy hours to try and get their papers out in a nightmarish hypercompetitive society where tenure is an almost-forgotten mirage somewhere above the smog. People live of noodles and fast food, and it’s always raining. It could be anywhere – Cambridge, Chicago, Los Angeles, San Francisco…

The morass of data has led to a high degree of studies whose findings cannot be replicated – irreplicants. The Blade Runners are a special breed of scientist/editor who track down and erase these irreplicants; this is not called murder, it’s called retraction (although the effect on careers for younger scientists can be terminal). All irreplicants have a built-in lifespan after which nobody cites them any more, although there are rumours of some irreplicants with much longer lifespans than the 4-year average.

Most irreplicants are somewhere off-planet in the mess of open access publishing where no sane human wants to venture, but there are increasing numbers being found on the homeworld of mainstream research. The powers that be are panicked. An influx of irreplicants would bring down the cosy arrangement with funding bodies and their taxpaying overseers. Retractions are going up and the Blade Runners are beginning to be overwhelmed.

Deckard, a retired and unusually badass Blade Runner, is brought in to track down 4 particularly vicious irreplicants. Like a lot of editors, the job has meant he’s lost all his friends and everybody hates him. He’s tracked down having noodles at a conference and brought back to publishing headquarters. The guy who brings him in is a postdoc who claims to work mad hours but seems to spend all his time making animal shapes out of paper.

Deckard starts off by going to the Tyrell “corporation”, a mega-group that produces tons of papers but is apparently also a major source of irreplicants. Tyrell, with more funding than god thanks to his stream of breakthrough papers, taunts Decker when he asks if he could provide him with an irreplicant (“Let me see a negative before I provide you with a positive”). Deckard performs a void/Krapp test on Tyrell’s example…but discovers that his subject, Rachel, is such a sophisticated fraud that she’s not even aware she’s an irreplicant! She’s been given an emotional cushion of completely false data, rather than just sloppy or rushed work.

Some sleuthing with image manipulation software leads Deckard to Zhora, an irreplicant who’s flaunting work on snake scales in Synthetic Biology circles. Deckard retracts her with extreme prejudice, but realises he feels no pleasure in correcting the record. He’s then attacked by another irreplicant but Rachel, enraged at the results of her void/Krapp test and now on the warpath, tries to shoot him in the head but misses and hits the other irreplicant instead. Deckard expresses his thanks by forcing himself on her sexually and creepily trying to win her trust by bringing her back to his place and playing the piano (the film is set before the MeToo movement started).

Deckard is miserable and goes off and gets drunk. Later he dreams about a unicorn, from which the viewer concludes (obviously!) that he’s an irreplicant himself – possibly why he ended up in editing.

Pris, a pleasure irreplicant (almost all irreplicants are good looking; too good to be true, usually), makes friends with a hard-up academic called JF Sebastian. His lab is in a burnt-out university department where all the other faculty have left and he doesn’t even have lights or insulation in the rooms. He does wacky work on artificial life. He’s so exhausted and burned out by the system that he’s gotten prematurely old and doesn’t give a shit that Pris and her psychotic boyfriend Roy are irreplicants. Basically, he’s treading water until retirement. He plays chess with Tyrell (they were postdocs in the same group back in the day) and gets Roy into Tyrell’s palace.

There’s a showdown between Tyrell and Roy. Tyrell says he can’t prolong Roy’s life and he’s served his purpose anyhow, having racked up hundreds of citations despite being based on dodgy data (“You have burned so very brightly, Roy”). Roy flips and murders Tyrrell, and then JF. Meanwhile Deckard gets to JF’s lab and retracts Pris, despite her pretending to be one of JF’s wacky AI projects.

Roy arrives and attacks Deckard. Deckard is overpowered by Roy (he’s been highly cited after all). Roy is going to murder Deckard but then stops and tries to impress him with how noble he is. Deckard watches Roy slowly cease to exist as his citations dry up and his basic conclusions are turned over and replaced. Decker resolves to get out of this horrible life and runs off with Rachel, hoping that she might not cease to exist after all.