2019 is the international year of the periodic table. To mark the occasion, we’ve created a periodic table…of scientists! Which element are you?

In the periodic table of scientists, group equates to career progression, while period denotes the duration at that particular career stage. The longer people spend at a particular career stage (i.e. advancing down a group), the higher their atomic number – which tends to mean they’re more reactive and unstable. Here’s a closeup on some of the features. 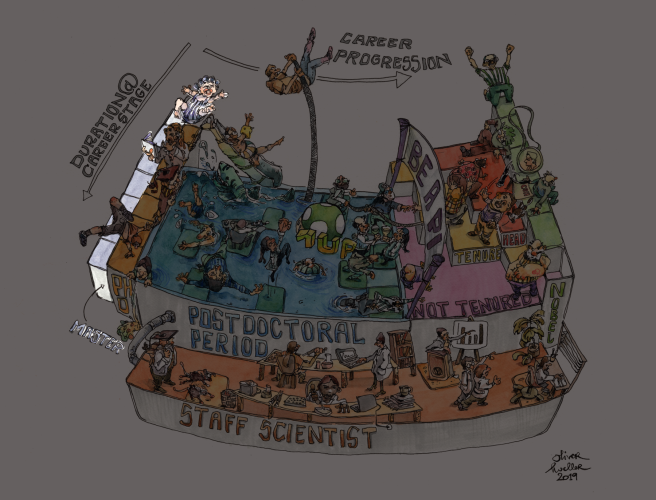 1. Undergraduates (hydrogen)
It’s made in stars, is the most plentiful element in the scientific universe, and is the raw material for everything else that follows. A mere proton and electron at this stage (though some advanced types may sport a neutron or two), but with the potential to become ANYTHING. It floats apart in innocence and relative ignorance.

2. Masters – group 1: alkali metals
The pre-PhD phase can vary in duration depending on which country you’re training in, so some people will transition quickly to group 2, while others may be around in this group for a long time. For all that, their behaviour is pretty homologous. Essential elements, but soft and will tarnish easily when cut. Frequently used in atomic clocks, because they remind older scientists of their age. Spare a thoughts for the rubidiums (atomic number 37) and caesiums (atomic number 55) out there – their pre-PhD period is such a slog that they may call it quits at this stage. 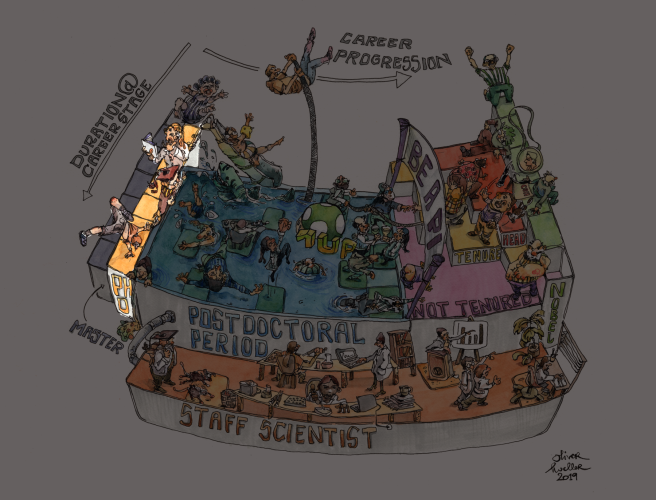 3. PhD students – group 2: alkaline earth metals
Shiny, silvery-white with idealism, and relatively reactive under normal conditions, this is where the real work starts. Both magnesium (atomic number – 12) and calcium (atomic number 20) are highly abundant and found throughout the scientific world’s crust. Older PhDs such as strontium (atomic number – 38) and barium (atomic number 56) are still widespread but concentrated in geographic locales, especially parts of the USA. Spare a thought for radium (atomic number 88) – these are the people who’ve been on their PhD so long they’ve become radioactive. Often bitter and with only the last shreds of their starting cheerfulness and optimism left intact, they’re pretty decayed. 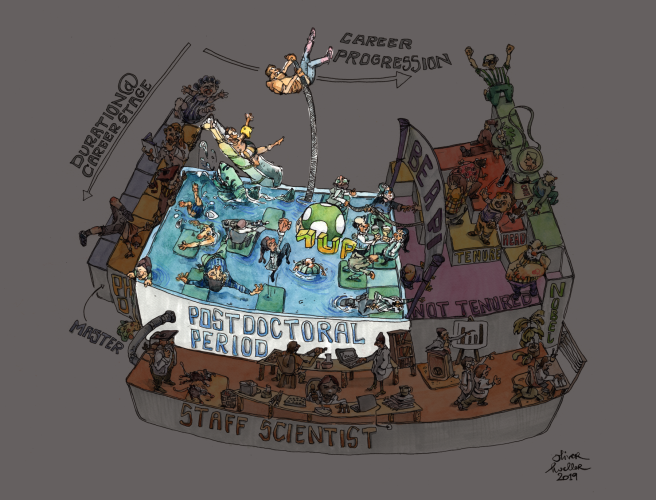 4. Postdocs – groups 3-11: the transition metals
Time to take a plunge in the uncertain waters of the postdoctoral period… A long and indeterminate phase, characterised by all those partly-filled d sub-shells. Occur in a wide variety of oxidation states and many also exhibit paramagnetism (occasionally bordering on idolatry), due to the influence of the externally applied magnetic field of their mentor. High catalytic activity, which is why they’re valued so highly by group leaders. Some are even autocatalytic and destined for big things. By this stage, all scientists display some metallic character, having usually sustained a few knocks along the way. Copper (atomic number 29) is the dream – a short, successful breeze through the postdoc period; silver (atomic number 47) and gold (atomic number 79) are those abundant but precious elements – competent, battle-hardened postdocs of proven worth that are dream faculty hires. Group 12 (post-transition) elements such as zinc and mercury are the postdocs who’ve already partially transitioned to scientific independence. 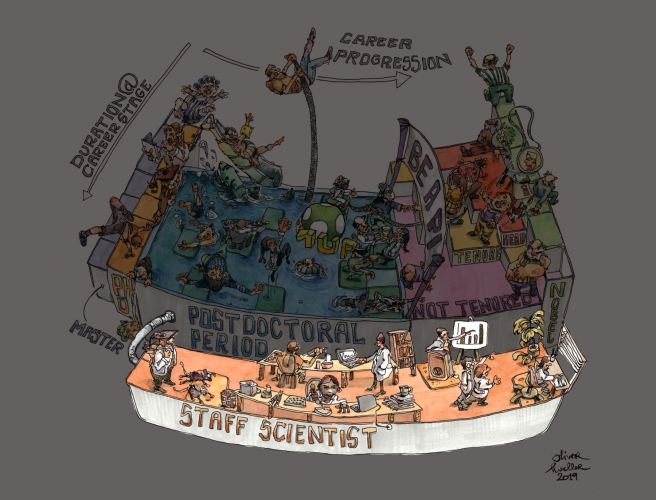 4a. Staff scientists – f-block metals
Tend to be drawn from the longer-serving postdocs in the system. Often rare, with some almost never found in nature, and many observed only in exceptional and artificial circumstances. The older ones (actinoids) by now have very large atomic nuclei and an extremely wide range of physical properties, which is exactly why they’re prized so highly (when they can be made and retained). Their radioactivity means they can be used to power research groups for generations. Often tend to be hybridised with other elements on the campus. Everybody wishes they could make more of them, and research into their synthesis remains an active area of enquiry. 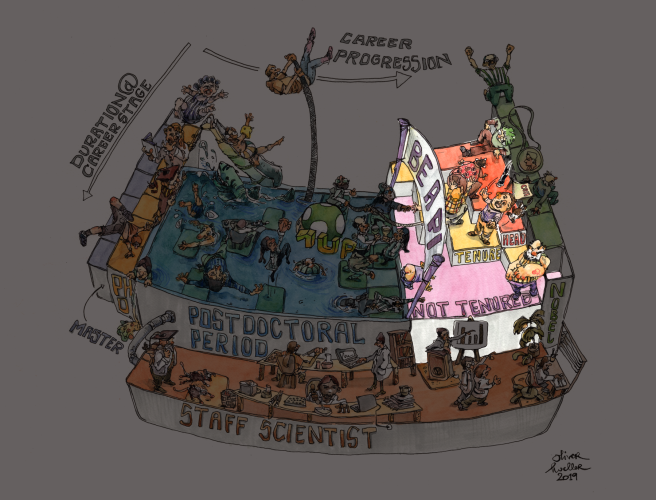 5. Junior faculty – boron group, carbon group
Can be metal, non-metal or metalloid depending on how much hardship they’ve had. The borons (atomic number 5) of this world are very rare: those who have transitioned directly to group leader status from their PhD, taking a pole vault straight over the postdoc pool area. The fast career progression of borons gives them a distinctly non-metallic character due to the easier ride they’ve had compared to some of their contemporaries. Aluminium (atomic number 13) and silicon (atomic number 14) are the typical junior group leaders – highly abundant, but seldom found in a free state, being usually found oxidised with teaching commitments, grant-writing, parenting, and myriad other commitments that keep them away from the bench.

6. Senior faculty – groups 15-17
Tenure at last! Group 15 (pnictogens) contains elements like nitrogen (atomic number 7) and phosphorus (atomic number 15) which are essential to scientific life. Noted for their stability, which is often a cause of friction with their younger faculty colleagues, who wish some of them would just retire. The chalcogens (group 16) are similarly essential but tend to get toxic as their atomic number increases. Some of the heavier chalcogens have completely vacant d orbitals and may struggle to hide it. The halogens (group 17) form a wide range of collaborative salts, but when found in their elemental state are invariably broody, reactive, and toxic due to years of faculty infighting. Will often bind strongly to younger faculty such as carbon in order to prolong their scientific lifespan. Regardless, these are the elders and leaders of the scientific community – especially the tough-as-nails ones who got there the hard way, or those who’ve been around so long they’ve seen and learned everything (Polonium, Astatine). Also contains the brightly blazing types who get the genius tag attached. 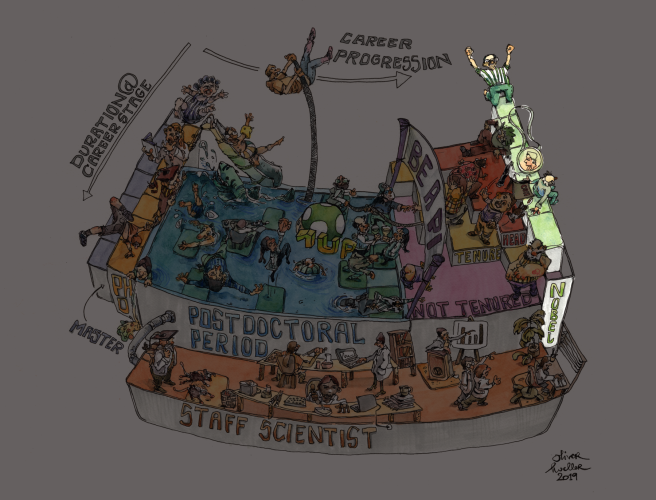 7. Nobel gases – group 18
Serene, unreactive, colourless, and with their valence electron shells generally full of appointments on the lecture circuit, TV appearances, and newspaper interviews. Tend to bask in public adulation while ignoring the often snide comments from their peers about serendipity and unearned credit. Some have left the lab completely behind and just float around above the fray. Aggressively sought-after to head up institutes and large university departments due to their light-giving ability.

Are there any elements you think we should highlight? Let us know if so.

Acknowledgement:
The theme for this posting was suggested by Catarina Gadelha (University of Nottingham) – many thanks!

One thought on “A periodic table…of scientists!”